On Wednesday, The New York Times ran a fantastic piece on the economic realities of battling climate change (buried in Business Day, of course – but beggars for objective analysis cannot be choosers, clearly). The article focused very specifically, and appropriately, on the carbon intensity of energy and why climate hyperventilationists do their “credibility” and the world a disservice by failing to emphasize the critical role nuclear power should play in reducing carbon emissions.

According to the IEA, over the last 20 years the world’s energy carbon intensity has fallen by just 4 percent. The author says (my emphasis in bold):

“This statistic, alone, puts a big question mark over the strategies deployed around the world to replace fossil energy. In a nutshell: Perhaps renewables are not the answer.”

According to the author, over the last ten years public and private investment in renewable power generation was circa $2 trillion, exceeding the total inflation-adjusted cost of all nuclear power currently in place and under construction…yet carbon intensity has done nada.

As the author outlines below, despite the well-documented falling cost of solar panels, etc, the atrocious lack of scale will be renewables downfall (relative to supremely overconfident forecasts by climate change hyperventilationists).

“Nuclear power faces hurdles beyond popular mistrust. Notably, reactors require a lot of capital up front. But renewables have a hard time producing power at a nuclear scale.

“The most worrisome aspect about the all-out push for a future powered by renewables has to do with cost: The price of turbines and solar panels may be falling, but the cost of integrating these intermittent sources of energy — on when the wind blows and the sun shines; off when they don’t — is not. This alone will sharply curtail the climate benefits of renewable power.”

Buried in the online article is a link to an article with great summary data and graphics on global and country-specific carbon emissions. The following three graphics show global carbon emissions under three scenarios: the current trajectory, Paris, and “below 2 Celsius”. 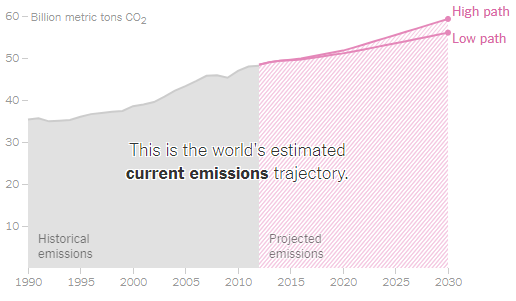 As I have said ad nauseum on these pages, battling climate change should be the single most bipartisan issue. I would posit that outside of social media forums 75 percent of Americans would agree on two things: 1) the climate is changing, and 2) something should be done about it. The debate should center on what to do, and how to do it.

Instead, both sides of the debate camp out in their irrational, ideological camps. The climate change hyperventilationists cite temperature “data” from billions of years ago to claim the ocean is going to wash over San Francisco and New York City by 2100; while the climate change denialists claim human-driven carbon emissions have little documented effect on climate change.

Former President Obama’s illegal regulatory wet blanket draped over the US economy is precisely how not to do it. Massive government tax credits to entities such as Berkshire Hathaway that are investing billions into renewables capacity is precisely how to do it. (Notwithstanding the first section of this post, well-targeted renewables generation makes good sense, as long as it is well-targeted and not irrationally replacing otherwise carbon-friendly power generation, such as nuclear power.)

This site uses Akismet to reduce spam. Learn how your comment data is processed.